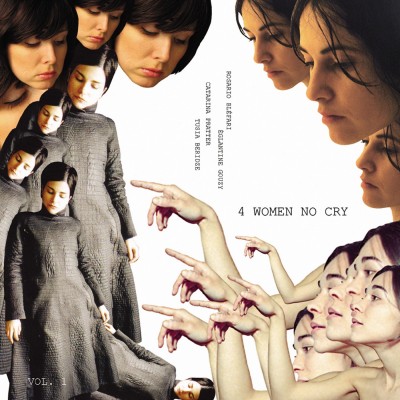 "Sugar and spice and all things nice, that's what girls are made of", or so a British saying claims. But although the tunes featured on this compilation are undoubtedly sweet, charming, playful and spiced with plenty extraordinary talent, the proverbial categorisation doesn't quite match its international protagonists (hailing from Buenos Aires, Paris, Vienna and Tblisi): Besides their unquestionable delectability, all women featured are cool, independent and purveyors of a confident idiosyncrasy that doesn't make for a quick-fix, easily consumed musical snack. No Women No Cry kicks off with Argentinian singer Rosario Blefari's doleful tale of separation and renunciation (Partir y Renunciar). Subtly atmospheric, yet deeply moving her gentle vocals and delicate guitar passages nestle between street sounds, their mellifluence disturbed by intricate disruptions on the follow-up Nunca. A lot of scope, a lot of unpredictability pervades Blefari's musical excursions, until Melodia weaves her weird and wonderful melodies into a stunningly beautiful pop song. Aware of her Goslab video activities we might expect Tusia Beridze aka tba to provide a visual accompaniment to this compilation - besides journalism and media studies the Georgian tends to focus on audiovisual productions. Musically, the incredibly versatile artist (check out her latest, excellent album on max.Ernst) allows the atmospheric, narrative and culture-encompassing aspects of her work to enter the composition: with Gorod, an immensely popular, Eastern European campfire classic (as featured in the Russian film "Assa"), Beridze introduces a very personal, emotional element to this collection, followed by hypnotised, semi-somnolent confessions couched in a blend of fake strings and real feelings (Cuet). Sometimes, Beridze employs a string of casual handclaps to highlight the poignant melancholy (Wound), sometimes she twists dejection and sharp rhythms into a touching take on modern minimalism (Hextention) - in the end, her tracks sneak straight into the subconscious, like her knowing nod to the electronic excursions of compatriot and occasional collaborator Nikakoi (Late). Parisian artist Eglantine Gouzy introduces a sharper, punctuated element to the proceedings: her short vignettes, veering between chilled New Wave charm, whispered elfin-like nursery rhymes (Nurse Song) and gorgeously nervous exuberance (Boa, Y' a pas de mal), afford luscious glimpses of Gouzy's eclectic fashion and art projects. Like her peers on this compilation, Catarina Pratter is well-travelled and wise to the world - since 2001 the Viennese singer and musician has played numerous gigs between Sao Paulo, Berlin and her Austrian hometown (with 550rondy) and contributed to numerous theatre productions and radio plays. While Johnny Isolaschn constitutes an exemplary exercise in minimalist subtlety, the subsequent Dreamin Of Love soon turns into a full-blown assault on the senses - disregarding any musical conventions the track bores straight into our ears and mind to unleash three songs in one, from stroppy beats to poppy inevitability. For this compilation, the original Bob Marley title (No Woman No Cry) was subjected to a radical redefinition: Whether it is the absence or presence of the female population these men might be crying about - why should women be considered harbingers of sadness at all? Gudrun Gut: "Enough of all these tears. Let's tear up preconceptions instead!"
Update Required To play the audiotracks you will need to either update your browser to a recent version or update your Flash plugin.
webdesign berlin