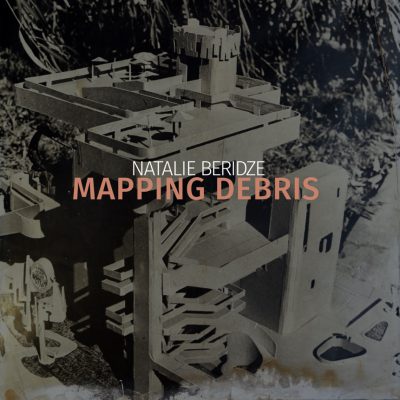 The arcane enigma from the caucasian mountains that is Natalie Beridze, treats us with a reflective concept album, her 9th solo album, focussing on buried chapters in her own work history.
“I sought after material, piled up on my old hard drives; - various sound debris, recorded and produced in the past. I recycled them beyond recognition and fudged them together into new samples to compose this album.
Mapping Debris is a term used during an investigation of a plane crash. Special agency collects millions of infinite small pieces of shattered metal and wiring from the crash site. They later try to reconstruct an original fuselage of the plane from assembled debris, in order to recreate its story and reveal the reason that lead up to the catastrophe.
Mapping Debris is a manifestation of dematerialization in physical domain and time: shedding skin turning into dust, decaying objects, corrosion, atrophy, rot, nonsense and factual forgetfulness, which mirrors chilling fear of perishing, losing integrity, memory of events, images, smells and sensation of touch of those, who have already perished in their earthly archetype. Yet in the aftermath of realization, one no longer dwells in colossal dead weight of inevitability of the end. The pattern perishing has a golden thread on one end - the one that makes us dwell in ceaseless possibility of rebirth, translation and remembrance. This album is a continuation of series of works I have dedicated to my parents lives, as well as their death...”

It is an intricate poetic net one enters while surrendering to Natalies music. The spiky grit and her heartwarming, harmonic swashes that touch you like a hug, belong inseparably together and spread that multilayerd consolation, manifesting the force of music in its most glistening form.
(Thomas Fehlmann/ Natalie Beridze)
Update Required To play the audiotracks you will need to either update your browser to a recent version or update your Flash plugin.
webdesign berlin