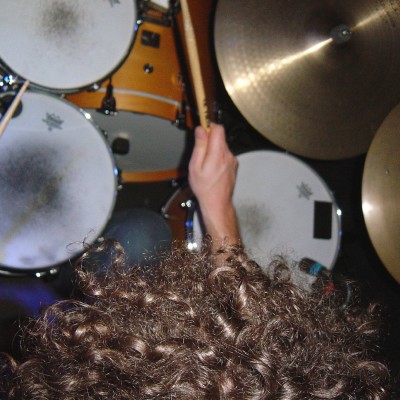 Drums For Fun and Fitness

Yes, we did it! This is the 9 minute drum solo everyone was waiting for. Laurenz “hits things”, as he puts it, for Flanger, Sydney based electronica group Pivot and improvisers Triosk with whom he has worked with Jan Jelenik and released on the Leaf Label as well as Scape. After having “experienced” his live drumming, Monika’s A&R Gudrun Gut persuaded the Australian drummer to make us 9 minutes in solo. He recorded the track at a friend’s studio in Sydney. In between working on a commercial he just grabbed his pots and pans and let go - producing an unimaginably complicated cascade of synchopated beats. The result is nothing less than striking to the ear. One gets the impression that he can play faster with one stick than your average drummer can with both. The B-side is graced with a fine trio of 3 minute remixes: The first is from Ocean Club member, DJ and monika recording artist Chica Paula a.k.a. Chica and the Folder. With her Folder-comrade Max Loderbauer she converted the original into something like a latin pop mix. Paula’s spanish vocals combine perfectly with a steel-drum sounding melody. Next up on remixing duties is Masha Qrella who is famed for her fantastic “Luck” album (monika 28), has recently released on Morr Music and is band leader with NMFarner and Contriva. With this mix she proves she is not only an accomplished songwriter but also a great producer. Appropriately the project instigator, Gudrun Gut, rounds up the 10” nicely with her own unique take on Pike’s percussive masterpiece. Gut’s mix excentuates the menacing sounds of Pike’s drums. Slowly droaning chords give it a mechanical feel exclusively using the original sound material. All in all, the 'Drums For Fun and Fitness' 10” is everything you’ve ever wanted.
Update Required To play the audiotracks you will need to either update your browser to a recent version or update your Flash plugin.
webdesign berlin