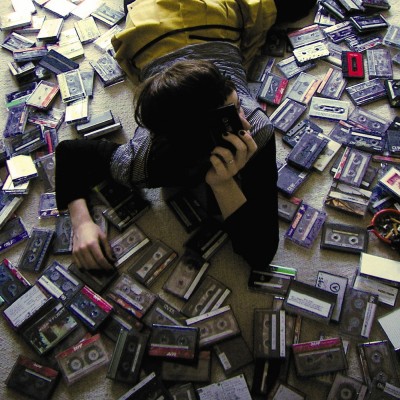 Milenasong is Berlin-based Sabrina Milena, a Norwegian/ Slovenian/ Croatian, living in her chosen home of Berlin. Milena has been making music for 5 years with her Fostex 4-track and has a general fixation on organic sound. As a former student of illustration, it is perhaps no wonder that her music is very visual; Milenasong almost paints with patchworks of sound. "Guitar chords are like sketches for me," says Milena, "I see working with layers, production, arrangements and contrasts as a challenge. The voice is for me personally my main instrument. Although I feel most comfortable singing in English, I grew up with the German language so I also like Germany a lot. And then there's the influence of the Norwegian fjords. My music is almost as if I were trying to be a bridge between these two countries." The result of this painterly pattern-making are intimate songs that mix singer-songwriter ballads with otherworldly soundscapes of ambient college and watercolor vocals. Milenasong's many influences include: Sandy Denny, Townes Van Zandt, Roy Harper, Roberta Flack, The Books, Les Mouches, Cat Power, Keith Jarrett, Fairport Convention, Pentangle, etc. She also loves cigarettes and the smoky sound of Joni Mitchell's voice.
Update Required To play the audiotracks you will need to either update your browser to a recent version or update your Flash plugin.
webdesign berlin