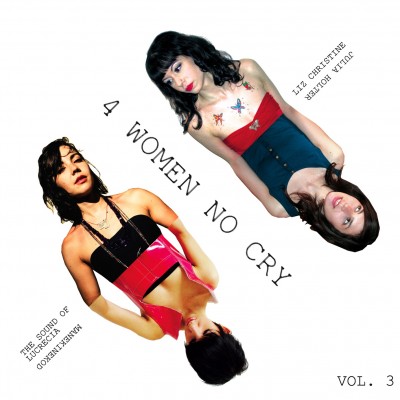 The Sound of Lucrecia

As regular listeners will know, the simple but effective concept behind monika enterprise’s 4 Women No Cry series is to present, on one long player, 4 more or less unknown female musicians from 4 different countries, each with their own unique sound. Now already on it’s 3rd volume, the latest instalment of 4 Women No Cry once again brings to light 4 of the worlds freshest new musical talents. As ever the Volume has been expertly compiled by monika founder Gudrun Gut. 4 Women No Cry Vol. 3 takes in everything from pop and electronica to experimental sound collages. 4 Women No Cry Vol. 3 begins with Colombian musician Lucrecia’s enchanting pop song Answering Machine which features Luke Sutherland from Long Fin Killie and Music AM on violin. The sound of Lucrecia is originally from Pereira in Colombia, where she began her musical project in 2003, and the hypnotically melodious number De vez en cuando is sung in her native Spanish. Previously The sound of Lucrecia’s tracks have been included on various Colombian electronic music compilations and her EP Like Being Home appeared on the Series netlabel. Her music perfectly eptitomises what 4 Women No Cry is all about so her place on this album was guaranteed. Come To My Past bears more than a passing resemblence to Masha Qrella’s releases on monika enterprise, it’s ok though as theres a mutual admiration between the two musicians. “The Sound of Lucrecia” probably has the most direct pop style of all the artists on this edition of 4 Women, and her meticulous attention to detail in production makes her tracks the perfect introduction to 4WNCV3. Just Before My Thoughts is another softly soothing ballad and brings Lucrecia’s contribution to the record to a close. From our origin in Colombia, 4 Women No Cry Vol. 3 now takes us to Athens, Greece and the music of Manekinekod aka Eleni Adamopoulou. The classically trained musician who has worked as a music teacher as well as in many bands describes her home town Athens as “noise and melancholy” which might explain why her sound is often dark, using noise from the city and transforming it into rhythms and melodies. Manekinekos are welcoming Japanese cats and are supposed to bring good luck to households and beckon guests to come in, and there’s certainly something very enticing about young Eleni’s music. Her first track on the new 4 Women, Unable To Display, is a downbeat flowing instrumental piece. Despite the title, Speedlight also rolls along at a relatively slow tempo; Manekinekod’s hushed vocal tones drift over contemplative piano and industrial samples. As one might expect from a 4 Women No Cry artist, Manekinekod is greatly inspired by travel and Room 302 is even named after her room number on a recent visit to Berlin. The romantic lyrics on cinematic number Like In The Movies were co-written with her friend Dr. Orange and Manekinekod’s last track on 4 Women No Cry Vol. 3, B with An, samples the Japanese vocals from an information machine Manekinekod found in the street in Berlin. From Greece it is but a hop and skip back over the Atlantic, to the US west coast and the witty, surreal and optimistic compositions of Los Angeles resident Julia Shammas Holter who picks up where Manekinekod left off - with an oriental sounding tune Moto Perpetuo. Julia Holter is a classically-trained keytarist from Echo Park. As well as having had numerous live sessions on Dublab, she has previously released on the Californian label Human Ear Music which she co-runs. She plays without sarcasm in the terrains that divide sentimentality, passion, and control. Her songs are written instinctively, and this spontaneity comes through on the orchestral pop number Neighbor Neighbor which is reminiscent of Broadcast. Julia has an unusual fascination with thought and art of the middle ages. Arcane poetry and mystical saints adorn her music, and this can be heard on Minerals and especially the clavinet on Measure What More. Her singing voice is crystalline like sugar or jewelry as can be heard on her closing number on 4 Women No Cry Vol. 3, Coyotes Of The Canyon. Liz Christine brings the 4 Women No Cry trip full circle ending as it started, with a South-American artist. This time however, its Rio de Janeiro in Brazil that’s home to the 4th woman on the collection. Liz is a true sound-artist in the way she creates audio-scultptures to achieve atmospheres and acoustic textures. Her tracks are extremely filmic and she even lists the movies of Buñuel, Truffaut, Marilyn Monroe and Greta Garbo as a big influence on her music. Liz is also obsessed with cats which should be evident from the purring sounds on her first track Dreaming. Green Eyes Girl is a powerfully dissonant tune that keeps on building but without ever reaching breaking point: it just descends into cat and dog noises! And 4 Women No Cry Vol. 3 comes to a close with Liz’s ambient sound-scape, The Blue Frog and the Green Fairy, in which she again expresses her self by manipulating voices and effects in soundforge. The latest chapter in the 4 Women No Cry story is as musically varied as you could hope for. Volume 3 again proves that there can be unity in diversity and where music is concerned, this is perhaps the utmost virtue. Lucrecia, Manekinekod, Julia Holter and Liz Christine combine symbiotically to make 4 Women No Cry Vol. 3 a remarkable quartet of international artists, each with their own personal take on electronic music and point of view in the fast changing modern musical landscape.
Update Required To play the audiotracks you will need to either update your browser to a recent version or update your Flash plugin.
webdesign berlin