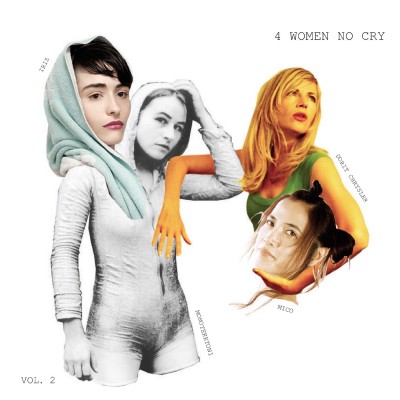 Following the success of last years 4 Women No Cry compilation, monika enterprise now presents the second in this eclectic series. 4 Women No Cry Vol. 2 again brings four new female artists from all corners of the globe together on one concept album compiled and selected by Gudrun Gut. The stars of the latest installment of 4 Women are Dorit Chrysler (New York), Iris (Barcelona), Mico (London) and Monotekktoni (Berlin), each of whom brings something different and special to the album. Although working and residing in New York city, Dorit Chrysler was born in Austria. Despite having a masters degree in music she has chosen to become a virtuoso on perhaps the most unusual electronic instrument of all, the theremin; a distinctive sound perhaps known to most people only for the Beach Boys Good Vibrations. She is also the founder of the NY theremin society and the European theremin association, creating community platforms for thereminists. Dorit has shared live bills with acts as diverse as Dinosaur Jr., Blonde Redhead, Marilyn Manson, Mercury Rev, Oingo Boingo, Rodelius and Echo and the Bunnymen. She has also collaborated and recorded with artists & producers such as Elliot Sharp, Matt Johnson (The The), Larry 7, Gordon Raphael (The Strokes), Foetus, Martin Bisi & Gibby Haynes (Butthole Surfers). Iris from Barcelona may be the as yet least established artist on 4 Women No Cry Vol. 2, but that is after all one of the main goals of the album - to bring newcomers into the limelight. Since studying Electronic Art and Digital Design, Iris has always been fascinated by computers. According to Iris, she got into music, composing and singing "by accident, as most important things in life." Although her live debut was only in 2004 she already played at Sonar this year and has previously featured on two compilations: "On the Wave" (Elektronica bcn, 2003) and "Aspitin Damage" (Koroshi Clothing, 2004), so you can be sure she has an interesting career in music ahead of her. Mico is the essential essence of artist Mieko Shimizu whose stream of conscious poetry set within a cinematic sound clash of fractured musical landscapes attempts to induce a sub-conscious response, which is further enhanced by her live collaborations with visual artists. Born near Mount Fuji, Japan, Mico is now based in London where she is extremely active in the art and music scene. She has scored numerous Manga animated films, released three solo albums formed the electro-ethno project “Mekong Zoo” with Japanese Violinist Aska Kaneko and, in contrast, also set up experimental Drum ’n Bass project “Apache 61”. Mico has also collaborated with Coldcut on their track "Wild about that thing" (ninja tune) as well as with monika's own Barbara Morgenstern and Robert Lippok on two tracks (kaitisburi and otsukimi) from last years Tesri album. Completing the quartet of 4 Women is the one woman electro show Monotekktoni. monika is proud to be supporting some home talent in this chapter of the 4 Women story. Monotekktoni aka Tonia Reeh is a true cornerstone of the Berlin underground music scene. She has played throughout Germany and Europe including shows together with Mode Selector, Kevin Blechdom, Heidi Mortenson and Barbara Morgenstern. Tonia has a successful side-project, the band Masonne, and used to play with Das zuckende Vakuum but as Monotekktoni everything is played by herself or recorded and recycled. Her sound retains a lovely analogue feel through the use of a four-track combined with samplers, synths and effects. As well as two albums on Sinnbus Records she has also had tracks on transmediale, pale music and klangkrieg. 4 Women No Cry is a unique musical project uniting at first glance disparate artists and so establishing a truly worldwide scene. Through this ground breaking series, now already on its second volume, monika enterprise is helping bridge a gap, break down geographic barriers and join the dots between upcoming female artists from diverse backgrounds. The music of Dorit Chrysler, Iris, Mico and Monotekktoni proves truly compatible on one record despite their extremely individual styles. 4 Women No Cry Vol. 2 is far more than a mere showcase compilation. It works so well as an album by giving an insight into the work of four new talents.
Update Required To play the audiotracks you will need to either update your browser to a recent version or update your Flash plugin.
webdesign berlin