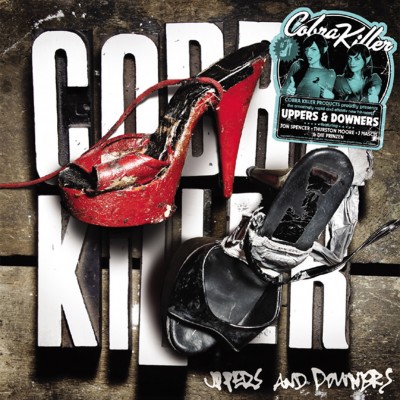 Cobra Killer are Gina V. D'Orio and Annika Line Trost. Both have played in bands in the former West Berlin since the age of 12/13. They formed Cobra Killer in January 1998, touring through Europe and revolutionising the then boring electronic music scene with their raucous show. In 2002 they took Australia and New Zealand by storm supporting PEACHES on various shows including the Big Day Out Festival. Shortly afterwards, they were also support act for SONIC YOUTH who were very impressed by the Cobra movement. Recently they have wowed capacity crowds supporting big names such as MARILYN MANSON and JON SPENCER, who also guests on two tracks on the new album. Uppers & Downers, their 5th full length studio album, sees Cobra Killer on form and sounding as defiant and unpredicatable as ever. Recorded in part at EINSTÜRZENDE NEUBAUTEN’s “Andere Baustelle” studio in Berlin, and featuring appearances by such very special guests as J. MASCIS and THURSTON MOORE, the record is a roller coaster ride that sees the band pushing the limits and again going way beyond expectations to deliver an album thats sure to please their many fans, especially when they take to the road to present the songs in their unmistakeably energetic live show.
Update Required To play the audiotracks you will need to either update your browser to a recent version or update your Flash plugin.
webdesign berlin