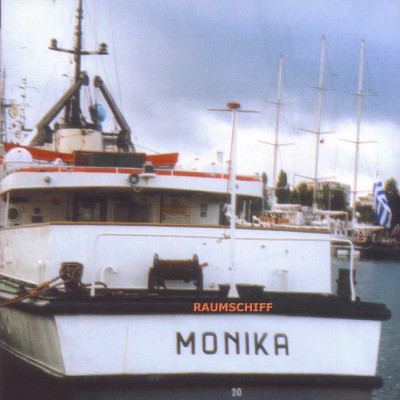 Not many people would call their label after a suicidal pet. And you might consider Monika a slightly unusual name for a goldfish. But then again Monika Enterprise most certainly isn?t your average label. With more love than money, impeccable taste and boundless enthusiasm Gudrun Gut has managed to assemble an eclectic mix of surprising talent, uncovering the strange coherence and warmth of Berlins finest purveyors of electronic pop music. Since 1997 Monika has been a secret source of cosy warmth, of personal sounds, of music you would love to be friends with. Spearheading a new generation of, frequently female, electronic introspective sounds, Raumschiff Monika invites you to put up your feet and LISTEN. Unique, gripping and very, very catchy, Quarks (Jovanka von Willsdorf and Niels Lorenz) have perfected the fine art of playing off, with and against each other. Occupying Quarksland, that nameless void between old school electronics, classic pop, various plonks, bleeps and Jovanka?s strong yet ethereal vocals, their distinctly different approaches melt, blend and warp tricky structures until nothing but pure pop remains. Komëit, on the other hand, uncover the fragile intensity of quiet understatement. Touchingly bare, the duo transform the sparsest of arrangement into moments of heartwrenching beauty, supplementing clear-cut simplicity with Glockenspiel, keyboards and digital loops. From ancient keyboard, beatbox and more than a passing nod to Germany?s great electronic heroes via Easy Listening to current electronic influences Barbara Morgenstern has never been one to stick to a genre. Held together by her minimal, intelligent arrangements and highly addictive, heartbreaking melodies she also stretched her talents to an excellent remix of Malarias 80ies new wave classic "Kaltes Klares Wasser? ? incidentally, one of Gudrun Gut?s earliest musical outings. Luckily, Contriva are anything but contrived ? for once the conventional rock set-up (gtr-bg-keys-dr) and solid indie upbringing did not result in predictable sub-Dinosaur dirge. Instead, the thoughtful, Berlin-based foursome love to argue their way to multi-layered, intelligent perfection. Mainly instrumental in a set-up that regards the voice as just another instrument, the latter is not missed in their melancholic pop structures. Timeless, fresh song-writing with no pretence to superficial glamour at its best. And lest we forget, there?s sassy pre-teen Rosa, whose prematurely wise words about men accompany Zigarettenrauchen?s lazy beats to a secret surprise hit. Frequently remixed by the good and great, all artists are united by their quiet charm, their unique feel for subtle pop moments. Come and join the goldfish lovers ? you?ll be seduced in no time! Sonja Commentz, Berlin 2001
Update Required To play the audiotracks you will need to either update your browser to a recent version or update your Flash plugin.
webdesign berlin