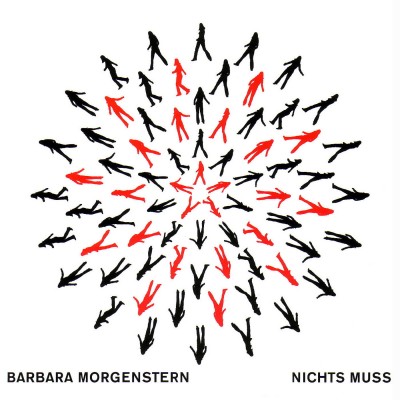 Since 1998, and the release of her debut album "Vermona ET 6-1", people have been struggling to describe Barbara Morgenstern's music accurately. Especially people like you and me, because here we are writing about this fine album, and there you are reading about it for one reason or another. But, really, why bother when you could just let the music do the talking? And talk it does. Even if the majority is in German, the music stands on its very own wonderful feet, lives, breathes and needs no more explanation. It's Barbara's third album for monika enterprise (besides various EP's, singles and remixes), though her first through the Labels network. It's utterly beautiful and, modestly put, her music shines brighter and more majestically than ever. Produced with Berlin's own dubmeister Pole, with a little help from Thomas Fehlmann (who has produced artists as diverse as The Orb and Erasure), "Nichts Muss" is a prime cut of teutonic electronic beauty; exquisite German pop music which will catapult Barbara into her own orbit, way beyond Indietronics or other typical electronic vocal music. With dreamy confidence, Ms. Morgenstern combines the charisma of her voice with inspiration and even more songwriting talent, and the result is an amazing mixture, unique in today`s electronic scene. The adjectives we thought of while listening to this record were endless but, as mentioned, anyone with a pair of ears and a heart will discover those for himself. Instead of showing off, though, let`s allow the musician herself to get a word in edgeways: Aus Heiterem Himmel (translates as: "Out Of The Blue?) (12? w/ remixes by Lawrence, Ellen Allien, Jimmy Tamborello [DNTEL, Figurine] and Tarwater) "This was a straight piano song at the beginning. But it sounded too bluesy so ? snip snip ? the piano has been cut into pieces.? Nichts Und Niemand (translates as: "Nothing And Noone?) "A dream I always had when I was a kid - one of those anoying reoccuring dreams.? Ohne Abstand (translates as: "Without Any Distance") "There is a gallery right by my studio where a London artist had an exhibition called "You See More Of The Mountain From Further Away". Actually this should have been the name of the album, but I was unsuccessful in finding a shorter form of the title, so the only thing remaining was this song title (and the content of the song).? Nichts Muss (translates as: "Nothing Has To...") "A good motto while working on the record and also the current highlight of my live set.? Merci (Dass Es Dich Gibt) (translates as: "Merci (That You Are Around)?) "You can apply this to anyone you like...? Kleiner Ausschnitt (translates as: "Little Cutout") "This is the oldest track and it took the longest time for the groove programming, believe it or not!? Move "This is actually a guitar track, but during mixing it became a groove song. But the guitar version is not bad at all... Pay attention! Philosophical Discussion: isn`t life just a chain of yes/no decisions!? " We´Re All Gonna Fucking Die "This is a quote from Alec Empire, who once welcomed his audience with this sentence. Oh man, this guy was really fucking right! Actually To Rococo Rot wanted to use the title for an album, but they kiindly allowed me to use it for this song. Many thanks! Long live Alec Empire, but we all gotta go sometime, for sure! " Is "This is my boyfriend's favorite song so it has his initials.? Gute Nacht (translates as: "Good Night?) "One of the few songs where my lyrics came first and the music followed.? Reset "This was the track I started with after my summer vacation 2001, still in that special summer mood. Great vacations!!? With "Nichts Muss?, Barbara has become a first class technoid chanteuse, and brings us an album that will fast become your friend and a companion in all circumstances and during every season.
Update Required To play the audiotracks you will need to either update your browser to a recent version or update your Flash plugin.
webdesign berlin