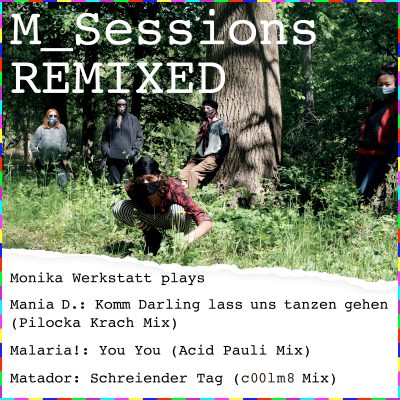 In 2021 Bettina Köster, Gudrun Gut and Beate Bartel celebrated M_Dokumente: a major retrospective of their early and still highly influential band projects, MANIA D., MALARIA!, MATADOR. M_Dokumente was both a book released via Ventil Verlag, a 2xLP of covers played by the Monika Werkstatt as well as an exhibition and performance series at Silent Green in Berlin, Wedding. The event featured talks, DJ sets and live performances by Chicks on Speed, Die Mücken and the aforementioned Monika Werkstatt, a rotating super-group collective made up of all artists from the current monika roster, in this case: AGF, ANIKA, BEATE BARTEL, GUDRUN GUT, ISLAJA, LUCRECIA DALT, MIDORI HIRANO, MOMMO G, NATALIE BERIDZE, PILOCKA KRACH & SONAE. Their M-Sessions release featured new versions of some classic tracks by Mania D., Malaria! and Matador as well as some rare original recordings. Now monika brings you 3 remixes from the M-Sessions by Pilocka Krach, Acid Pauli and Coolm8.
PILOCKA KRACH is herself part of the Monika Werkstatt and one of the most prolific recent signings to the monika label. Her remix of the Werkstatt’s version of Komm Darling lass uns tanzen gehn by Mania D. shows Frau Krach’s typical tongue in cheek attitude: it’s a funky twisted tune with a distorted guitar anti-solo and the pitched lyrics (trans. “the world may end, darling let’s go dancing”) are as fitting in today’s post-pandemic digital dystopia as they were in cold-war 1980s.
ACID PAULI aka Martin Gretschmann is known for his early work with The Notwist and has gone on to be a renowned solo artist and DJ. With the Yo Yo remix of You You, originally by Malaria!, he has delivered a straight up dancefloor banger. True to his name, he weaves acid baselines between the solid beats to create a pure club track.
Last but by no means least it's the turn of Chiara Rüßmann aka COOLM8 to reinterpret the M-Werkstatt interpretation of the Matador song Schreiender Tag. This remix came about as part of the workshop Remix Regendered. Which was designed to share the theory and practice of remixing in electronic music, with a special focus on female composers. This c00lm8 remix has an oldschool groove and makes excellent use of the vocal samples to great ironic affect.
Three bands from 80s Berlin, all beginning with the letter M and now remixed by 3 of the best DJ/producers of the 2020s. M_SESSIONS REMIXED is the perfect culmination of M_Dokumente as it brings an even more modern energy to Monika Werkstatt’s take on the music of Mania D, Malaria!, Matador. This record puts the M in reMix!
Dirk Markham
Update Required To play the audiotracks you will need to either update your browser to a recent version or update your Flash plugin.
webdesign berlin