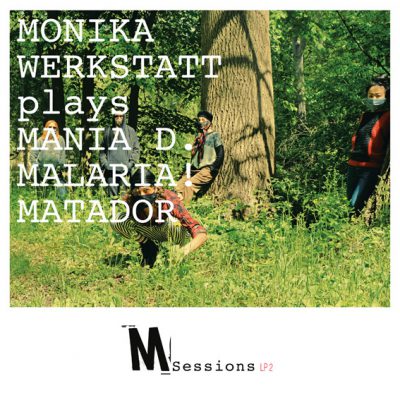 M_Sessions is offering a contemporary version of Mania D., Malaria and Matador’s music for the 40th anniversary plus the rare originals. Bringing the past into the now and into the future.
Monika Werkstatt seemed the perfect choice for new interpretations. Founded in 2015, comprising female electronic musicians and producers from the entourage of Monika Enterprise and Moabit Musik. The loose collective played dozens of improvised concerts around Europe and released a studio album and live recordings in everchanging artist constellations. The M_Sessions involved Pilocka Krach, Beate Bartel, Midori Hirano, Mommo G, Lucrecia Dalt, Antye Greie-Ripatti, Natalie Beridze, Annika Henderson and myself. Here the form of interpretation is focussing on keeping the freedom of their improvised work and adapting it to the collective appropriation of songs. I cannot imagine a better reinterpretation of the material with its real life ups and downs and with its enthusiasm.
The original core team of Beate Bartel, Bettina Köster, Manon P. Duursma and myself selected "Rare Originals" from the repertoire of the 3 bands where we saw special relevance and beauty - these tracks are on LP2. We rediscovered live tracks, living room recordings and demo versions from our times long gone. Enjoy.
G.Gut
Update Required To play the audiotracks you will need to either update your browser to a recent version or update your Flash plugin.
webdesign berlin