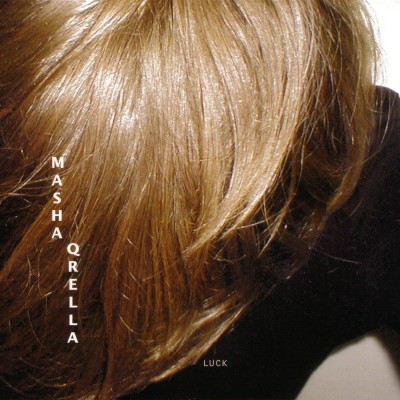 Lucky you! It's here now, totally out of the blue: The first solo-album titled Luck by Contriva guitarist/bass player and Mina keyboarder Masha Qrella. Mostly put together in secret, Masha dropped first some hints about her project and finally a handful of burned cds into the cd-players of friends, but only after having finished the recordings completely. But though this publication appears somewhat unexpected, many people might have waited and hoped for it secretly: The tracks of the two instrumental bands that Masha Qrella takes part in always had a song oriented architecture, even though they didn't use words. But in those band projects the most exciting thing was exactly the combination of four individuals to one sound, whereas in the two songs in which Masha got carried away to step in front of the microphone (Contriva´s "Next Time" and Mina's "Desktop") the sound got more concrete in a personal way by the use of Masha`s voice and lyrics. One could hear that this was a direction to be explored more thoroughly. Now, on LUCK, Masha Qrella is following some of her own concepts with even greater care. And the songs turned out as brittely beautiful and restrained passionate as her voice sounds. On the surface you can hear a production with soul and skill, that sometimes breaks a drum loop unevenly above the knee, that indulges in one gap or another and that leaves a note where it has been dropped. The tracks that first sound roughly put together in a way common in hip hop, turn out to be merely the gruff medium for the more airy song structures that they transport. There is (next to Mina and Contriva) as much Elliot Smith and Robert Wyatt in them, as the production opens up associations with Jim O`Rourke and Peaches. The instruments bass, guitar, drums and keyboards are mostly played by Masha herself and hint to the sound of a band. But the impression the songs make oscillates between that of the organically grown and that of being highly constructed by the exceptional details of the production. The connection between these two poles is the singing. In the English lyrics, that are mostly concerned with love and friendship, Masha Qrelly seems to have found within her doubts a save home base from which her narrator analyses and declares her feelings towards her surroundings. Doing that, the lyrics still stay vague enough to leave some room for the listener his/herself. LUCK is a personal and extraordinary album, which at first bulkily, but then warmly and elegantly nestles against the walls of every room, and which stays present for a long time, even after the last note has faded away for a while. Chris Flor
Update Required To play the audiotracks you will need to either update your browser to a recent version or update your Flash plugin.
webdesign berlin