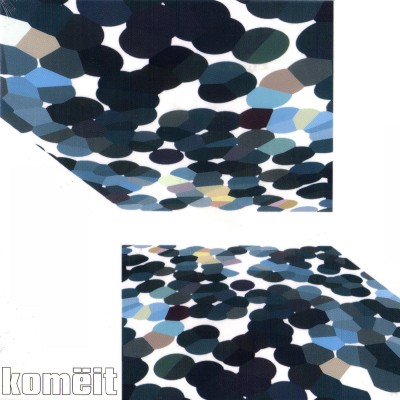 komëit consist of chris flor (guitar, vocals) and julia kliemann (keyboards, glockenspiel, vocals). the komëit project started when chris was asked to perform a couple of his home- recorded songs live. he started preparations on his own, but then luckily decided to ask julia to join him. from then on everything went really fast: within three weeks they had put together a set for guitar, computer, e-piano, glockenspiel and harmonic singing. after the concert they were asked to put out an ep on lok-musik, berlin. more concerts, including a tour throughout germany followed. now the lp is out, containing eleven songs written together. though the tracks are clearly song-structured and the choice of instruments points to a tradition of home recording, the computer, digital cut-and-paste montage and the loop are vital for their songwriting. but what chris and julia are concerned with is not klangforschung, the processing of sound: voices and instruments have not been sent through filters but stand next to each other in digital clarity.
Update Required To play the audiotracks you will need to either update your browser to a recent version or update your Flash plugin.
webdesign berlin