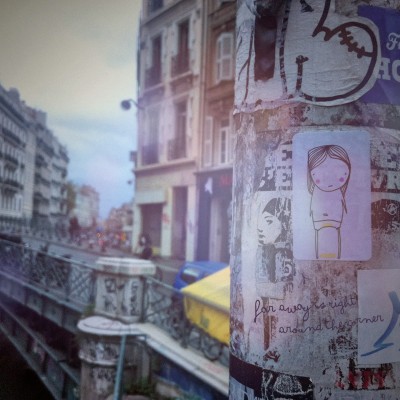 Far away is right around the Corner

Our first Monika release for 2015 is a new signing: Sonae from Cologne with her debut album 'Far away is right around the Corner' on vinyl and digital only. Containing 10 tracks written between 2012 and 2014 the record deals with reflections about friendship, growing up and everyday life full of hope as far away is right around the corner. Sonae's music is wide, flowery and raw from the very quiet (Ambient) to tiny club moments (Electronica) always embedded in an electronic soundscape. About Sonae Sonae put out her first release in August 2012 with the two-track EP 'Cologne' on Ambient & Electronica label A Strangely Isolated Place. Her remix of 'Saint' by Markus Guentner followed in 2013, a compilation release for 'Entmutigt', and 'Song of Hate and Anger' was included as the last track on Markus Guentner's exclusive mixtape for Substrata Festival which also featured artists such as Ismael Pinkler, Gustavo Lamas and Rafael Anton Irisarri. It also was the year of Sonae's live debut at the Perspectives Festival in Berlin where she performed as part of an immense lineup alongside the likes of Ada, Electric Indigo, Mimicof, Islaja and many more. In 2014 Sonae appeared at Art's Birthday Party at Södern Teatern Stockholm, t.a.t. Cologne and the Ambientmusikzimmer at Weltkunstzimmer DuÌˆsseldorf. In August she released a remix for Ambient artist '36' and in December the 'Shirley M. EP' a split release with Austrian musican Chra. Now in 2015 Monika-Enterprise is thrilled to present Sonae's debut-album 'Far away is right around the Corner'. Besides her music work, Sonae is an active member of female:pressure, an international network of female artists in Electronic Music, who organised the 'female:pressure Electronic Concert' series in Cologne and recent events in Berlin. Sonae's ambient creations inhabit a subtle space within the musical cosmos; one where you can go to experience a kind of sonic weightlessness - just float off and let the sound waves wash over you. What people say "The word 'beautiful' just fits perfectly to describe this album. To me, beauty lies both in subtlety and strength, in harmony and noise, in sustain and decay. Sonae work embraces the depth of sensation as well as its volatileness, she links contemplation with deconstruction. These poetic, delicate and spacious pieces of music let me immerse in a multiverse of potentially conflicting emotions and adventures - thrilling!" Electric Indigo "This work is a well crafted sound world full of juxta positions and contrasting textures. As an emerging talent in the electronic music world Sonae has created an album that slowly reveals itself with each glorious listen. Anger and grace collide." Simon Scott "Sonae combines darkness and light, depths and heigths in a perfect way. Normally, there couldn't be more disparity between all these sounds and very audible moods. Tones and melodies, perfectly clear, pure and beautiful, and abyssal, distorted, displaced and demolished sounds at the same time. Sonae merged all of that harmonically into a magnificent symphony. 'Far away is right around the corner' says all!" Markus Guentner I had Sonae's demo run in my room on repeat for some hours - and soon the roo
Update Required To play the audiotracks you will need to either update your browser to a recent version or update your Flash plugin.
webdesign berlin