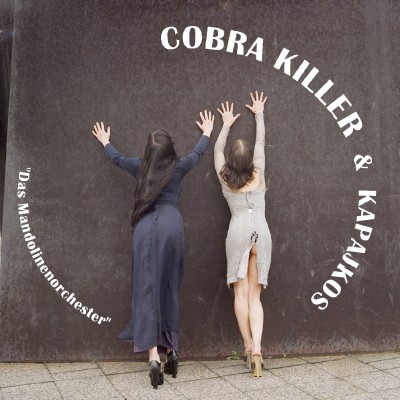 Mund auf, Augen zu... ...Surprise! Cobra Killer have put on their high heels and followed in the footsteps of their (great)-grandfathers. Annika Line Trosts great grandfather was a conductor and violin teacher of Helmut Zacharias who started his career in Gina V. D’Orios grandfathers orchestra - the Lubo D’Orio Orchestra. For their latest record, Annika Line Trost and Gina V. D’Orio have teamed up with mandolin orchestra Kapajkos to produce something quite extraordinary. Still present are Cobra Killer hits such as “Heavy Rotation”, “L.A. Shaker” or “Show Me Your Ruler” plus one new piece “Ist es farbig?”. But gone are the electro beats and retro samples. These have been replaced instead with a classical folk instrumentation; three mandolins, bass, keys and cajon. The result is most striking; like an Eisler-Brecht speed-orchestra playing romantic ballads. New life has been given to many of the songs from last years “76/77” (monika38, 2004) as well as selected songs from “The Third Armpit” (Valve, 2002) and “Cobra Killer” (Digital Hardcore, 1998). This fresh take on the Cobra Killer sound adds a new dimension to the band. It’s the same unstoppable energy we know and love but from a completely different perspective. With this album Annika Line Trost and Gina V. D’Orio show they have the artistic freedom and creative originality to do something entirely new. The crowd surfing, wine showering spontaneity of Cobra Killers live show is reflected in their decision to move in an unpredictable direction with this new album. The combination of Cobra Killer with backing from Kapajkos really defies comparison. This fresh new project is sure to satisfy fans of the girls as well as anyone just looking for something a little unusual and exotic. Don’t say no to Hanns Eisler and Bert Kaempfert - say yes to Cobra Killer!!!
Update Required To play the audiotracks you will need to either update your browser to a recent version or update your Flash plugin.
webdesign berlin