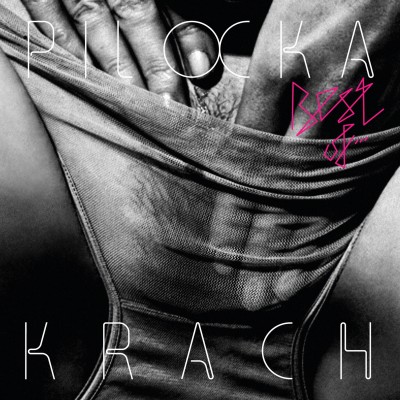 Under the modest title "Best Of", the Berlin native Pilocka Krach has assembled eleven hits from her current treasure trove in a debut album that holds a pedigree of "homegrown premium extra plus". Although she has been releasing tracks continuously since 2007 (including on Katermukke and her own label "Greatest Hits International"), up until now she could not have cared less about the album format. What's the point? Generation Download prefers things bit by bit. And her oeuvre consists entirely of hits, anyway. For Pilocka, even B-sides were seen as a mere waste of time, something best avoided. It's better to get it done and bring it out, with each track as it comes, song by song. Fittingly, Pilocka Krach has the rare gift of inextricably linking both music and fun, and her fans fall at her feet for it. Extroverted to the brink, extravagant, but approachable, this woman unleashes a kind of techno from a different angle: funky, demanding, dirty, funny, live and direct. She initially emerged from the Noise Avant-Garde scene in Vienna, then the techno-hippy post-rave scene of a good-humored Berlin that gladly considers Monday afternoon to be peak time. From there, Pilocka won over hearts and rode on to victory. Anyone who has ever seen her live can attest to her generous nature – she gives and doesn't take. Bar25, Fusion Festival or the Nation of Gondwana were the first stations to promise exactly what Frau Krach delivers: boundless passion and enthusiasm, genuine music for racing hearts. It's meant to rock – more Freddy Mercury than Robert Hood. Pure belladonna! So "Best Of" begins accordingly with "Oh Yeah Voll Krass" – which in the context of this album is more a mid-tempo number of rock stage proportions, boasting a massive bass line – a wave that immediately goes pop when raving. "Top Secret Keeper" takes up the baton and asserts itself somewhere within a game that plays with codes, as the title suggests. The track predates the current preoccupation with whistleblowers, and is thus, so to speak, prophetically great. Indeed, that's actually how it takes shape: In addition to an aggressive synth bass, it features those early disco acid vocal-synth snippets, which were probably not even as much fun at the time as they are now. All the (pop) codes, which ascend to a first summit during the third track in the delusionally amusing statement of the refrain: "I would like to be able to play the guitar like Bob Dylan". So can he really do that? Well, he stands onstage with a guitar, and has a guitar with him on all the photos – which at the time was a signifier for the then-new gesture of the singer-songwriter, the people's tribune, the voice of a generation. And now comes the voice a new generation, who also happen to want the same thing. So is "Best Of" ultimately songwriter techno? The track also features a keyboard melody a` la "Popcorn", over a clear techno beat, full of clear electronic cymbals. Nothing here is naturalistic. For what is nature, anyway? Beauty comes from within! Oh, yeah, then there actually is a guitar solo!!! From that moment on, Frau Krach pushes the tempo decisively towards the floor and the main stage, towards peak time and wild abandon – which is her specialty: "My Name is fun, fun, fun, my name is fame, my name is cheesy, my name is hammer, my name is you..." She then continues: "Hey Mr President (give me five Euro)". Well... It is truly marvelous! Anyone who has been at one of her live appearances knows that this lady rocks, simultaneously loving and brash as she tears up the stage. It's like that at every one of her numerous performances, and now she has finally conveyed that spirit over the full length of an album: "Best Of" is like an application for a dream job that she – unhesitatingly, without batting an eyelid, yet with an extra dash of mascara – clearly defines: Rock Star! This is once again author-techno, but by an author who takes herself anything but seriously, and who gladly and immediately sacrifices any authorly gesture for the sake of a great moment – a moment that is best shared with her! Pilocka Krach prefers to make a splash. Daniel Meteo
Update Required To play the audiotracks you will need to either update your browser to a recent version or update your Flash plugin.
webdesign berlin