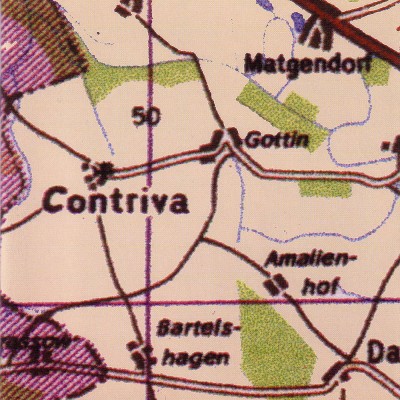 In January 2000, after several smaller publications, Contriva released their first real studioalbum ("tell me when"). Now, about a year later, they bless us with a double-cd. The first cd in the set offers us a look at their earlier publications: the first tape and the first 10inch (both still under the name of Zimt), the second 10inch and the two singles (all on lok-musik); also there are three hard-to-get sampler-contributions. The cd documents the musical evolution of the Berlin-natives within the span of 1996 to 1999. Formed as a trio (Max Punktezahl-guitar, Masha Qrella-Bass, Hanns Lehmann-Drums), their first recordings still had a nervous postrock sound to them. It was after Rike Schuberty (keyboards) joined the band in the beginning of 1997, that increasingly songoriented structures of the still instrumental tracks became a distinct trademark of contriva. This development continued on "tell me when". The second cd contains eight remixes that were done within the closer and closest circles of friends and colleagues around Contriva. The songs of the band have been radically worked over, while the melancholy mood of the original material has impressively been preserved. From Iso68, Tom Thiel (Sun Electric) and Jan Jelinek (Farben) Contriva have been done over for electro-lounge-compatibility. Jörg Burger (Modernist) delivers a pop-version that invites you to sing along on the dance-floor. Once there you can sway melancholically to the Superpitcher Mix of Stuck. Isan deliver a do-over of Sure Enough, Ragazzi make Contriva sound like Depeche Mode and Chris Flor (Komëit) charms the melodies of Contriva into silent beauty.
Update Required To play the audiotracks you will need to either update your browser to a recent version or update your Flash plugin.
webdesign berlin