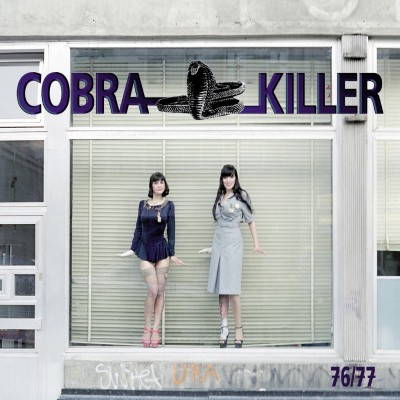 COBRA KILLER say that they want to heal with their music. and looking at their audiences it soon becomes clear just what is meant by that. they have the effect of medicine on their listeners - and their fans anyway. nobody can escape the grip of scarcely dressed gina d'orio and annika trost, drowning themselves in red wine and throwing their songs into the faces of the audience. they are loud and hot and definitely take any location captive. that way they even knocked out sonic youth: "we played a couple of shows these last few nights in germany with a band called COBRA KILLER that completely knocked us out...it's two girls & a sampler, and it was just phenomenal, like two of the most inspiring shows on a lot of different levels. i really loved it." (thurston moore) PS: on the dvd "monika's ascension" (out 17.may 04) you can have a glance of what cobra killer can do to you on their 15min special guest appearance...... COBRA KILLER, wildest gina v. d'orio und kwikest annika trost, the hottest act in town, have found a new home: monika enterprise. with their long awaited new album COBRA KILLER extend their healing power into your livingroom: its a long way from digital hardcore to pop! the new recordings sound hot and highly energetic- always with a 60s feel, a rock/electronic mix with drenched in subversive, funny lyrics undercut by sharp breaks . the two girls sampled, programmed and screamed and here we have their masterpiece: 76/77. they had interesting people to work with: t.raumschmiere (lets have a problem), thomas fehlmann (high is the pine) and erik d. clark (i like it when..). last but not least it was rashad (dubplates and mastering) who helped the killers finishing the whole album with their dream sound.
Update Required To play the audiotracks you will need to either update your browser to a recent version or update your Flash plugin.
webdesign berlin